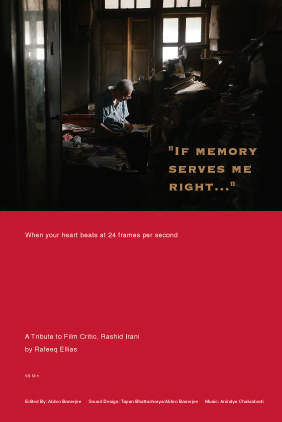 Rashid Irani, is an Indian of Zoroastrian-Iranian descent, one of India’s tiniest minorities. He once owned a traditional Irani restaurant, the kind that were invariably at the city’s busiest crossroads but are now slowly disappearing. A life-long lover of books and cinema, in reverse order, Rashid’s heart beats firmly at twenty four frames per second as he traverses many worlds from his small, cosmopolitan neighbourhood to the greatest films of all time. Reliving Marilyn Monroe, Werner Herzog, Abbas Kiarostami and more. A dedicated bachelor at 75, he has ‘lived life vicariously through movies’ till the pandemic ground everything to a halt. A frozen frame. This film takes us back to a time bygone, in a city we once knew… bringing people, nostalgia and moments of poignancy to life.